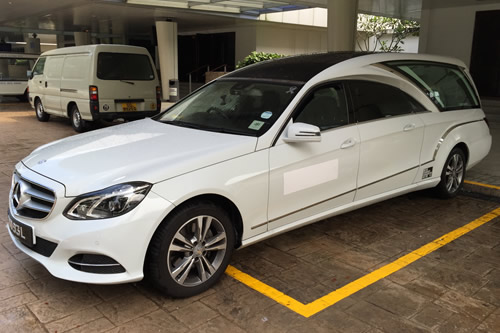 In a Christian Funeral, the Hearse will be the leading the vehicle. All cars in a funeral procession drive with their lights on. In some cases, a police escort will join the procession to keep the roads safe for all cars.

Hearse is an important element of a Christian Funeral Service. This is the car that will transport the body in the coffin to its final resting place. A worthy vehicle to take away a worthy life is crucial to respect the one who has passed on.

Using a Hearse is an important Christian tradition that has evolved over the years. The Hearse leads the funeral procession from the church to the cemetery. This evolved from when people used to carry the body in the coffin, and their walking power was considered the Hearse.

The word Hearse is derived from the Latin word hirspex which means ‘harrow’ or ‘rake’. A harrow used to be a horse-drawn carriage or piece of equipment that would draw furrows in soil. Related to Christian tradition, the word harrow has significance. Jesus ‘harrows’ from hell before his death and resurrection, on a journey to ‘rake up’ the righteous souls from the devil.

While the Hearse used to be a horse-drawn carriage, it started to be built in a way that resembled a car. With the advancement of the moving vehicle, the Hearse became an automobile. One of the first Hearse used in the United States of America was in 1909 during a funeral procession.

The modern Hearse is convenient for a funeral procession as it allows dignity as well as solemnity and ease to take place during the time of grieving. Some of the features of a Hearse that make it easy to identify on the roads include windows with curtains as well as motorised lifts to lift the casket. There is also sometimes a bouquet of flowers or a ribbon on top of the vehicle as an additional sign of respect.

The circle of life is a complete one. From birth to death and everything that happens in between, each life deserves being remembered and recognised for the events that have happened. The best way to give a life the ending it truly deserves is by investing in a quality funeral service that also has a good Hearse collection.

For Christians across Singapore, having a traditional and authentic funeral serving following the appropriate religious rites of passage is paramount. To ensure that you have a genuine Christian funeral service for your loved one, choosing the best company that adheres to these values makes all the difference.

We provide everything you need for a Dignified And Affordable Funeral